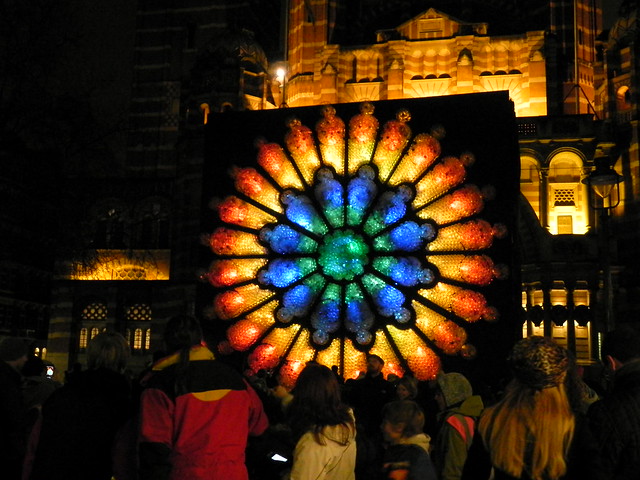 So here’s my promised Day Two post about Lumiere London. Having discovered all of the installations on the South Bank (read about that here) we headed back into the city to discover as many more as we could.

We started with this beautiful installation on Westminster Cathedral. This is the Catholic Cathedral just down the road towards Victoria from the Abbey.

What’s so special about this one is it’s powered by people! There were bikes in two lines, facing each other in front of the cathedral and the amount of the installation that was lit up depended on how many people were pedalling at the time. Of course, I had to have a go!

I was being considerably shown up by the 5 year old on the rather-too-big-for-him bike to my left but it was fun all the same and I seemed to get on at just the right time. One of the organisers managed to get everyone to stop pedalling until the whole installation switched off. We were then told to all pedal slowly again and bit by bit, the different coloured sections of the installation lit back up. It was so much fun and really good that it was such an interactive one! 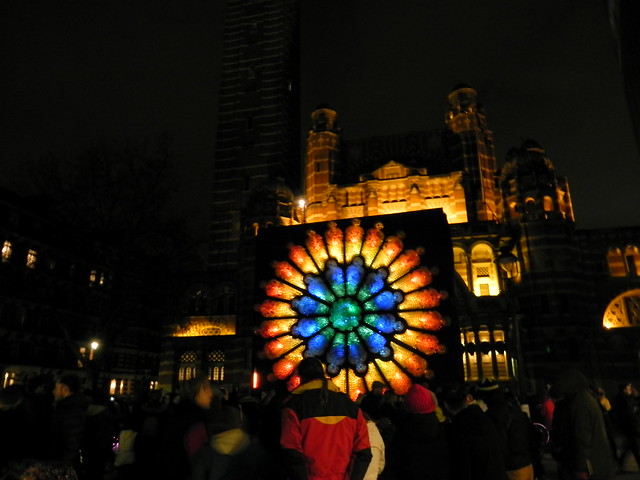 The second installation was a video projected onto Westminster City Hall of all sorts of people climbing up the building. It was really well done and fun to watch.

We then made our way down towards Westminster Abbey where the side of the abbey was lit up in the most beautiful way. It was probably my favourite of all the ones that were projected onto buildings, it was absolutely stunning. 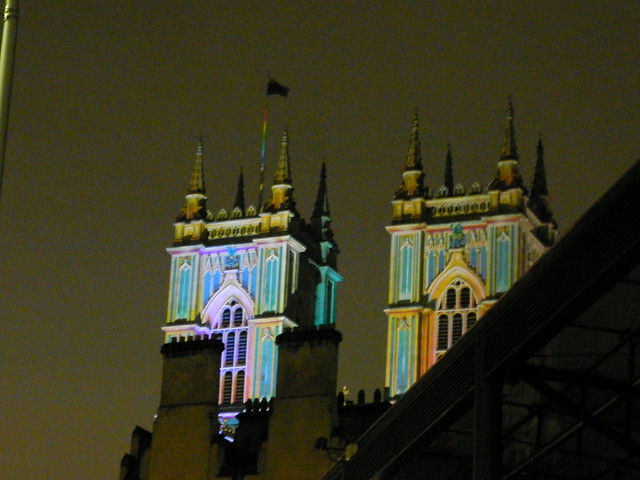 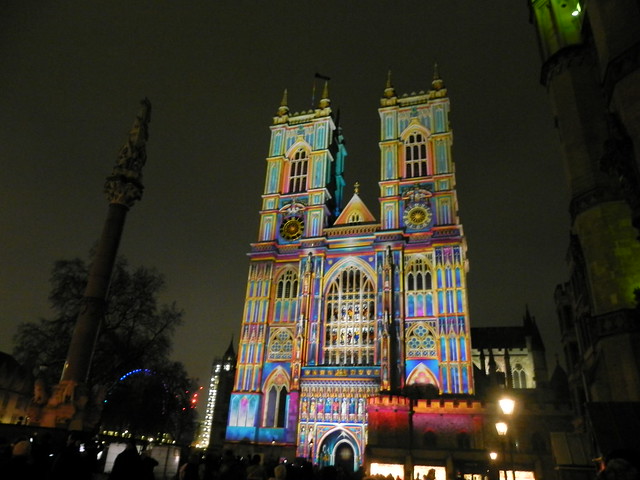 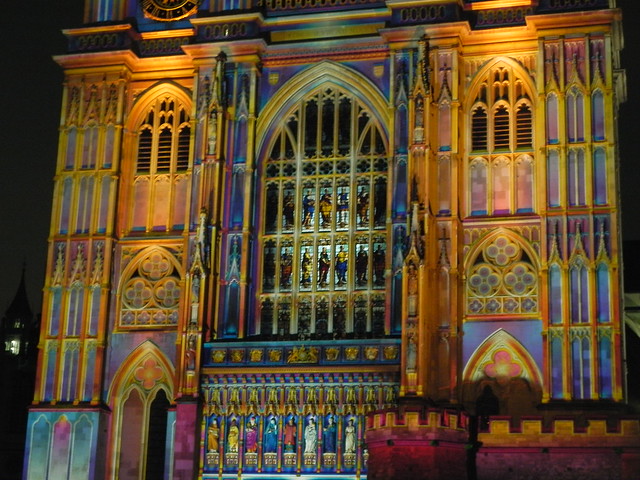 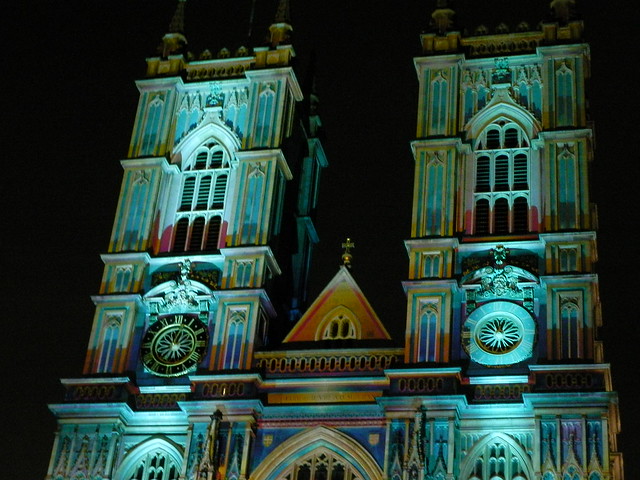 From Westminster Abbey we walked up between Green Park and the back of Horseguards Parade, down the Mall through Admiralty Arch and up in to Trafalgar Square to see the incredible installation there. Set to music, hundreds of illuminated balloons switched on and off to create a pulsing display. Set amongst the fountains which are already lit up in colour it looked spectacular, especially from the raised part of the square outside the National Gallery. 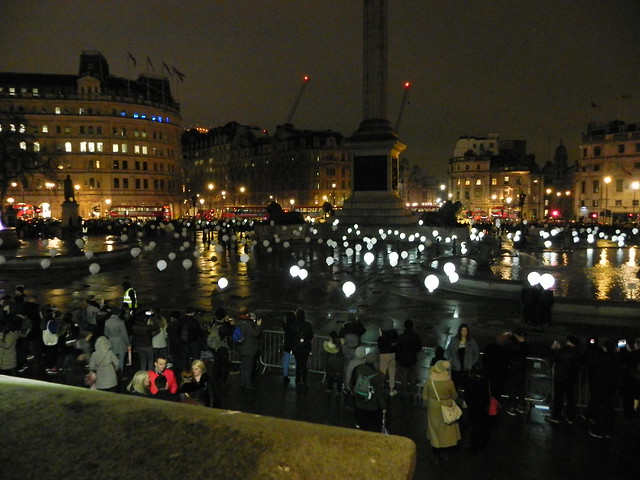 Our next stop was Leicester Square so that Aidan could see it as he wasn’t with me the night before but having taken all my photos already, I’m gonna move on. Oh, we did got to Busaba for dinner. I love Busaba, it’s so much better than Wagamamas so there’s that. Anyway, from Leicester Square we headed to China Town. Here’s an obligatory China Town arch shot. 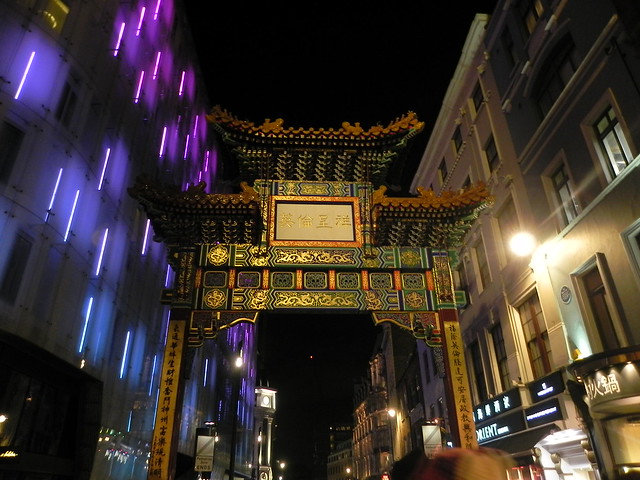 And here are the wonderful flamingo puppets that were making their way around! They were another favourite of mine from all the installations we saw. 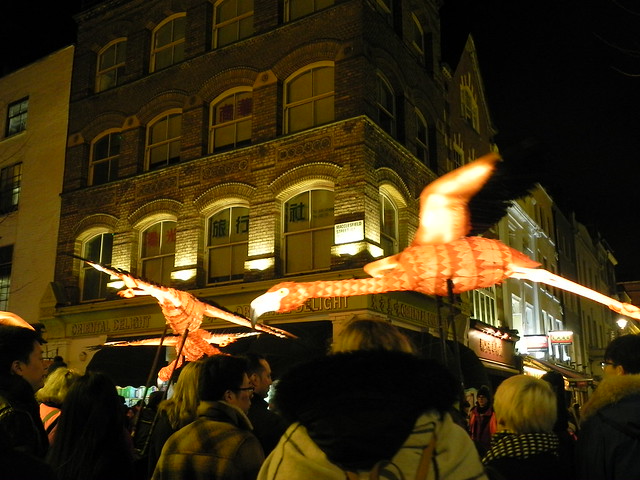 From China Town we headed down into the edge of Mayfair, down Picadilly and to the installations in this area. Unfortunately I couldn’t really get a good shot of the next one but it was lots of mason jars all with moving images inside them. It was really cool but my shot unfortunately doesn’t show how good it was. 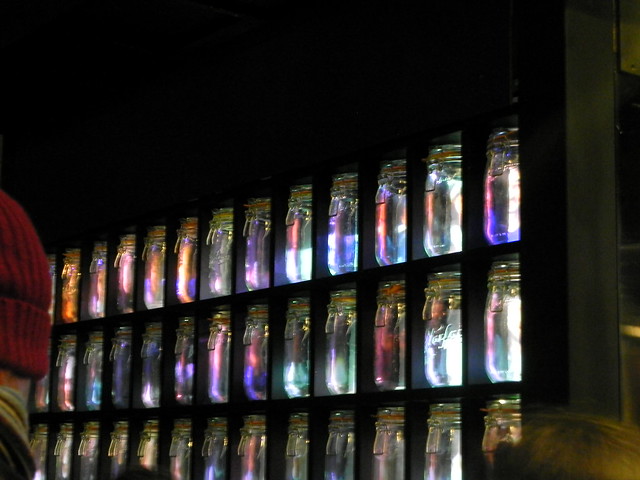 Then we rounded the corner to find this giant installation based on reflections before heading to Piccadilly where we saw another fantastic projection installation, this time being projected onto the Hotel Cafe Royal in Piccadilly Circus. 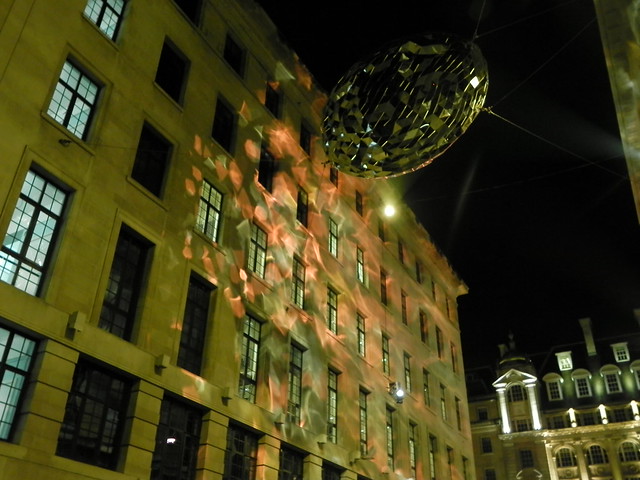 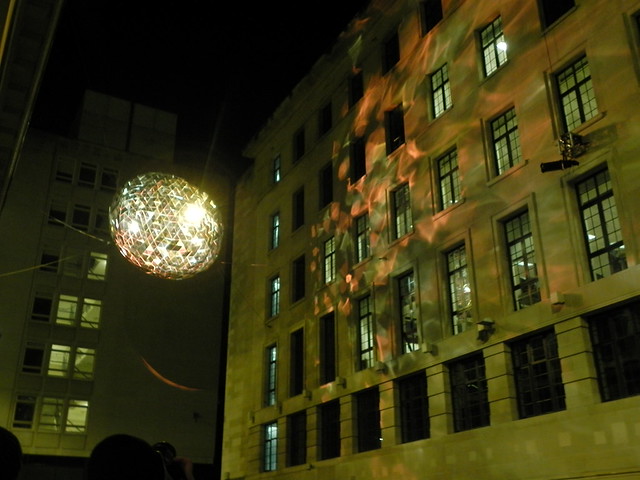 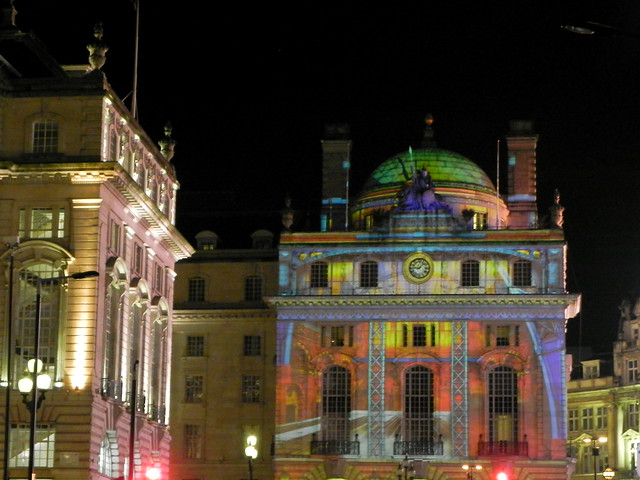 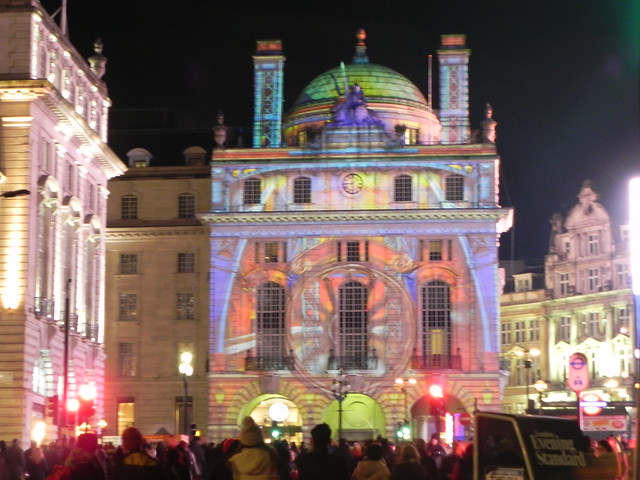 From here we headed down Waterloo Place and towards St. James’ Square. Here we found another large installation that was winding its way through the trees of St. James’ Square. It looked like fibre optics and the photo doesn’t really show the scale of it. But I am pleased with some of the effects the photos have created. 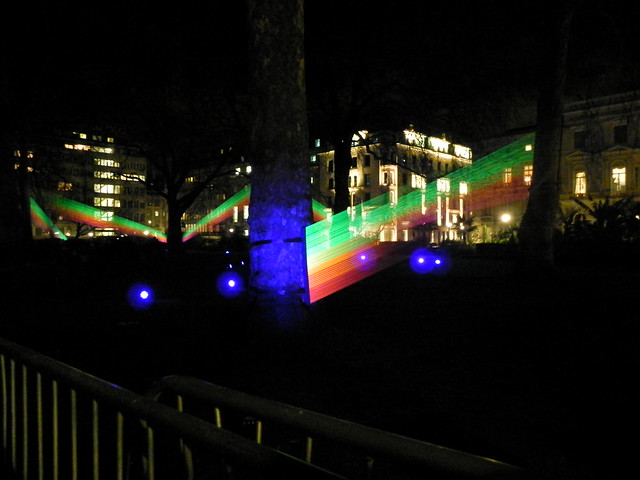 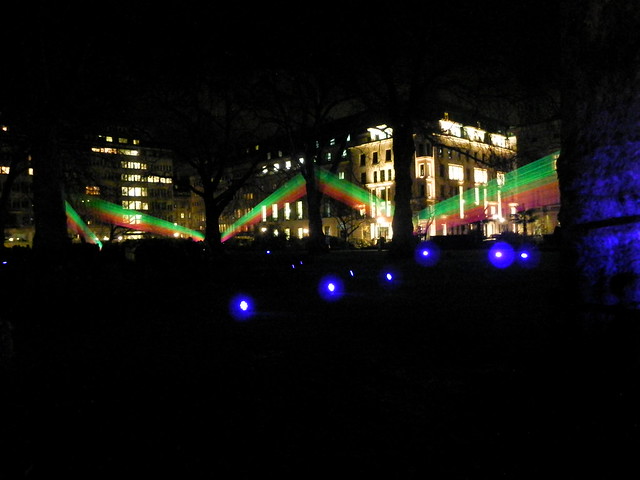 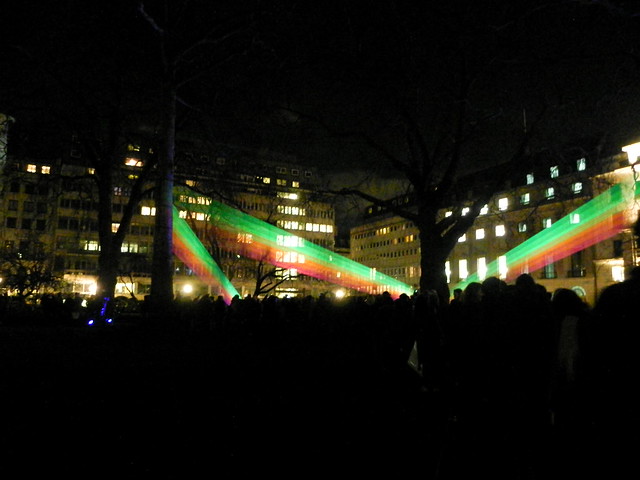 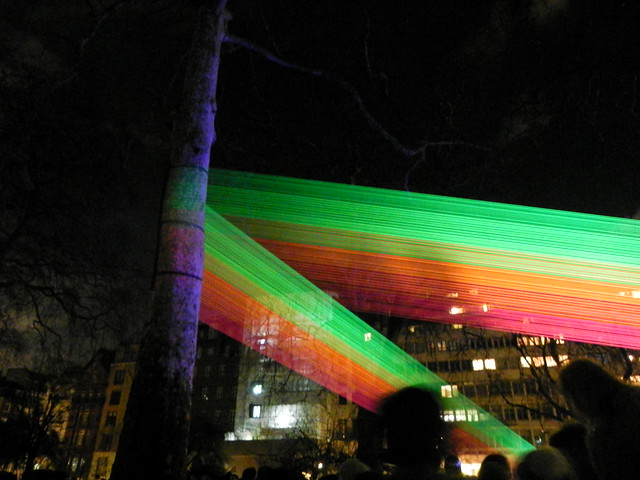 Next we headed up to Piccadilly and across it into Burlington House, home of the Royal Academy. I’ve only been to Burlington House Courtyard to stare at it’s pretty architecture before but since going to Lumiere I’ve finally been to an exhibition there and I wrote about it the other day. The installation they had was lovely. One side of the quad was lit up in green and the other in blue and on the opposite side to the entrance, a video called Love Motion played. Unfortunately Flickr has cut the embedded version of the video down to 3 minutes, if you’d like to see the full version (5 minutes) then you can click here to watch it on my youtube. 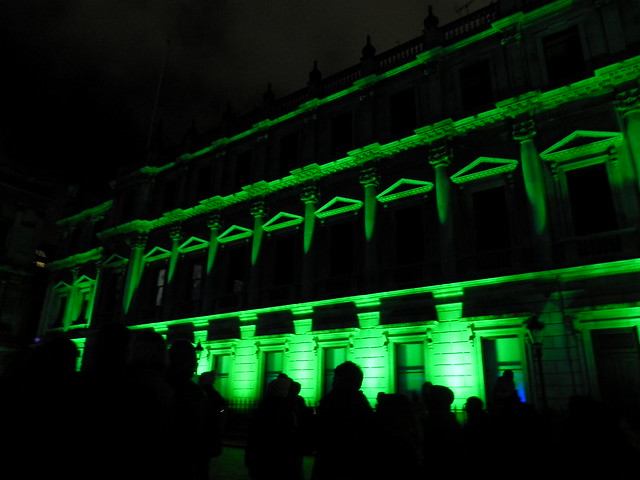 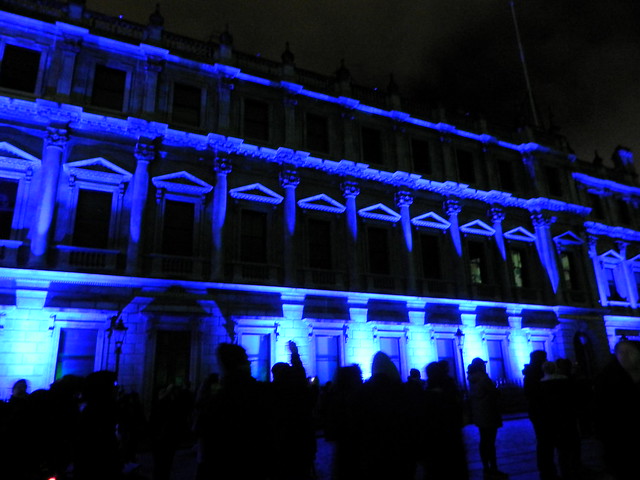 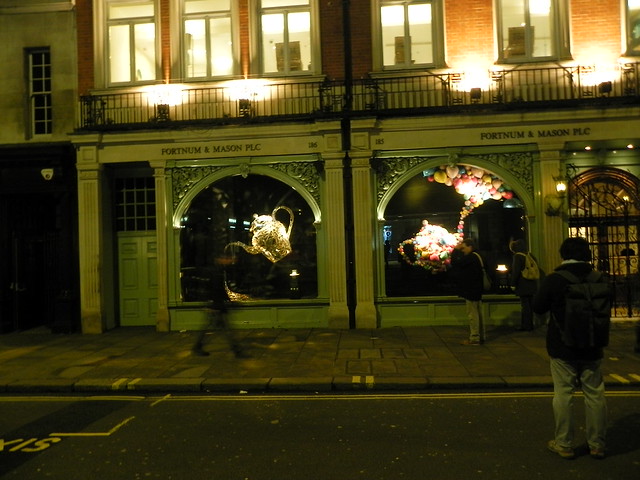 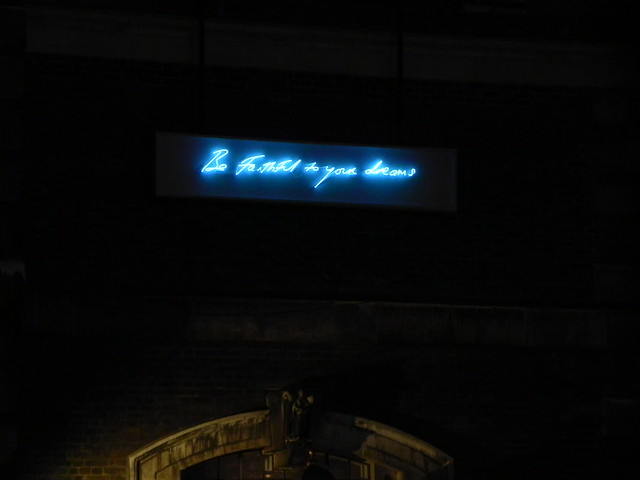 As we got back to Piccadilly Circus we headed up Regent Street to explore more of the ones in Soho, starting with Frictions, a moving projection on to the corner building of 103 Regent Street. 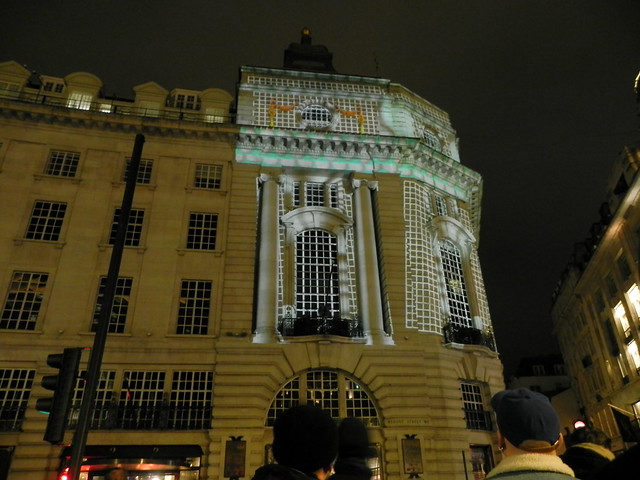 We continued along Regent Street, seeing Shaida Walking. 2015 along the way and diving into Carnaby Street to check out the lightbulb installation there before our final stop at the Origin of the World Bubble suspended above Oxford Circus. 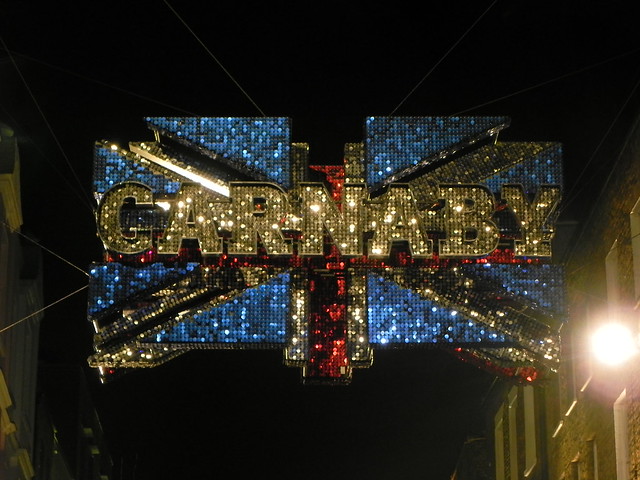 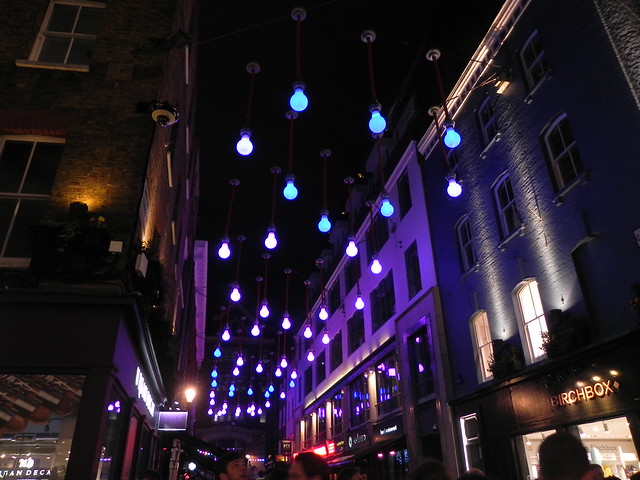 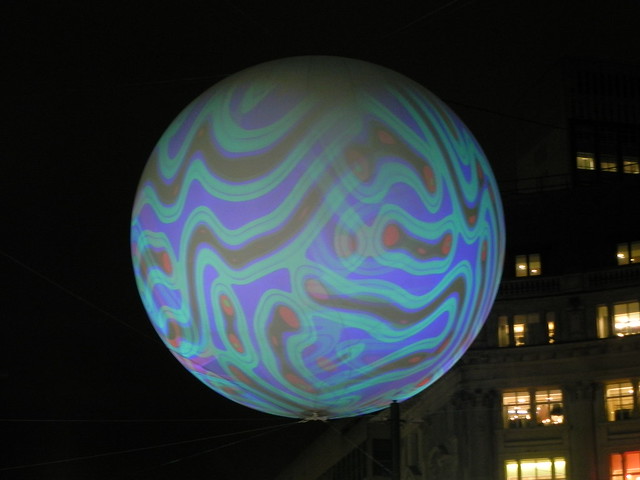 By this point we were well and truly knackered and jumped on the Tube to head home. There was easily enough exhibitions to have been able to see some on all 4 days of the event but unfortunately we didn’t have the time to do them but what we did see what truly, truly stunning. I cannot recommend coming to this when it’s inevitably on again next year.