Last weekend, Aidan and I headed on our yearly pilgrimage to Weston-Super-Mare. ‘What’s at Weston-Super-Mare to keep you coming back every March?’ I hear you ask. Well… For those that don’t know me personally, you won’t know that I have a rather quirky hobby of historic battle re-enactment. Yeah. It’s odd, I’ll give you that but it’s also the most immense fun and pretty much takes over my life.

So every March, we trek to Weston as Aidan’s regiment (yes, it’s still split out by regiments) throws a banquet in a local village hall. We all put on our fanciest kit and have a very lovely evening of food, drink, music and dancing.

Our friends Matt and Vicky who live about an hour away from us arrived at ours on Friday night ready for us all to head over together on the Saturday morning.

Aidan and I met Matt through the re-enacting back in 2011 and he subsequently bought his girlfriend Vicky along in 2014. Luckily Vicky loved it too and we’ve all been firm friends ever since.

As well as a love of history and re-enacting, Matt, Vicky, Aidan and I have a shared love of board games so we spent Friday night playing firstly, Tsuro, which we’d played before and then Flash Point: Fire Rescue, a brilliant co-operation board game that we managed to lose both times!

After a late night of games and wine, we had a relatively lazy start before breakfast and packing the car to head off to the West Country. With a good Indie Disco playlist (you can find that here) we arrived at our hotel on the edge of town and started to get ready.

Having been doing this hobby since the mid 1980s, my Mum (yep, my parents met doing the hobby and are still active members) has a range of pretty banqueting dresses so Vicky, myself and my Mum were all wearing dresses that belonged to my Mum.

Vicky’s in particular was a) beautiful and b) older than both of us! It was the first banquet dress my Mum bought when she was a super skinny little thing and it hasn’t been worn since before I was born which, as Matt pointed out with an apt historical reference, means it’s not been worn since before the Berlin Wall came down…!

Vicky looked absolutely beautiful in it and also, rather like Belle from Beauty and the beast. As an absolute lover of reading and books, it was only right that we got a ‘Belle’ style shot of Vicky! 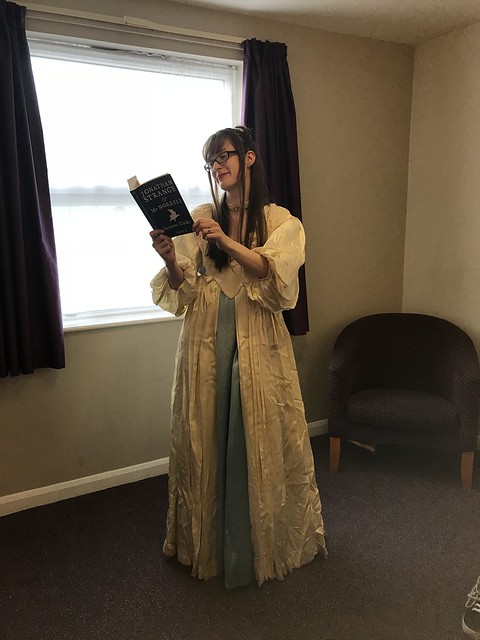 We obviously made sure there was a photo of all 3 of us ladies in Mum’s dresses! 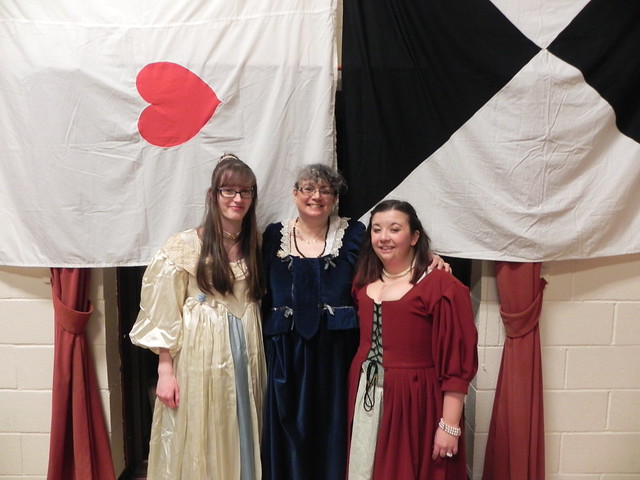 Sorry to disappoint but that’s literally the only photos I have of the banquet for this post, I took next to nothing all evening!

Anyway, re-enacting is a summer hobby mainly so it was really good to see all our friends again after spending the winter apart so we grabbed drinks from the bar and started on a much-needed catch up with everyone. We also met a few new faces who’d recently joined the hobby so it was great to make new friends too.

We then took our seats for a fantastic Scottish-themed followed by a speech and awards presentation and then it was time for some dancing.

In keeping with this year’s Scottish theme, it was a Ceidlidh and after a bit of persuasion, various people got to the floor and started to join in.

All in all, it was a truly great evening full of laughter and dancing and maybe 1 too many gins for some people.

The following morning was meant to be an easy start and heading, as normal, to the local Harvester breakfast. Except it didn’t turn out to be that easy. We headed back to the hall to pick up Matt and Vicky from the upstairs accommodation and help with the final bits of tidying up and then headed to Harvester. Only to be told it was completely full for Mother’s Day! The banquet was on Mother’s Day last year and we had no problems so didn’t expect for it to be an issue!

Ringing those that hadn’t joined us yet, we let them know we were trying plan B at the pub next door to the hotel we’d been staying in. Only to have the exact same problem!

Our next idea was one of the Wetherspoons in the local town because for all their faults, a Wetherspoons can be counted on for food and cheap beer when you’re not sure of what your other options are.

This time we were lucky and our hour-long search for Breakfast was over! 10 of us ate and chatted before a couple of people had to head off to a planning meeting for the regiment held at another local pub and another couple of people started their journey back home to Wales. The rest of us decided the weather looked a bit suspect and found there was a board game cafe located a few doors up from the pub so headed off to investigate.

The 6 of us had a great time at Rooksburg’s Realm playing a game called King of Tokyo before heading off to meet the others at the end of the planning meeting.

The final stop of the day for myself, Aidan, Matt, Vicky and my parents was another pub! There’s a theme here…! This time though it was for Sunday Lunch at the same pub we’d had Sunday lunch at last year. Called The Summerhouse, the food was brilliant again and  the desserts were especially good!

Unfortunately the traffic home was rubbish and so was the weather so it took about 4 hours to get back, luckily we had another indie disco in the car and finally made it back to Essex and from there Matt and Vicky headed back home.

Overall it was a great weekend and has made me super excited to get back to re-enacting again as the season kicks off properly for this year at Easter, only a couple of weeks away!

Oh, and I won this guy at the raffle, much to Aidan’s protestation…! He’s called Henry.