Before we went away, I’d planned on doing 3 posts about the 6 days we were there but we did so much and I had such a good time and took so many photos, I’m not even sorry that it’s going to end up being 6 posts.

In a bid not to overload this immediately, I’m hoping to get back to my regular posting schedule of Mondays, Wednesdays and Saturdays and post once a week about our holiday and then write about something, anything, else on the other two days!

So, we arrived in Ljubljana, Slovenia’s capital, really late on the Saturday night. For those that may be interested we flew with Wizz Air from Luton and having paid for the Priority booking to get baggage included, priority boarding and extra leg room (both Dad and Aidan are over 6ft, leg room was less of an issue for me…), we were impressed with how smoothly it went and what we got for our money.

Enough about that though, we awoke Sunday morning and were able to see better out the windows of our Air BnB to see we were in a sleepy suburb. It was lovely! And very quiet which was perfect. We’d picked a location just south of the town, across the river but still less than a 20 minute walk into the heart of the city.

After a breakfast of croissants provided by our Air BnB host, we headed into the city to explore. In less time than it would take to walk from Tottenham Court Road to Marble Arch stations in central London, we’d gone from the quiet suburbs into the centre of the city which is, unofficially at least, a place called Three Bridges which links the old and the new parts of Ljubljana city across the Ljubljanica river. 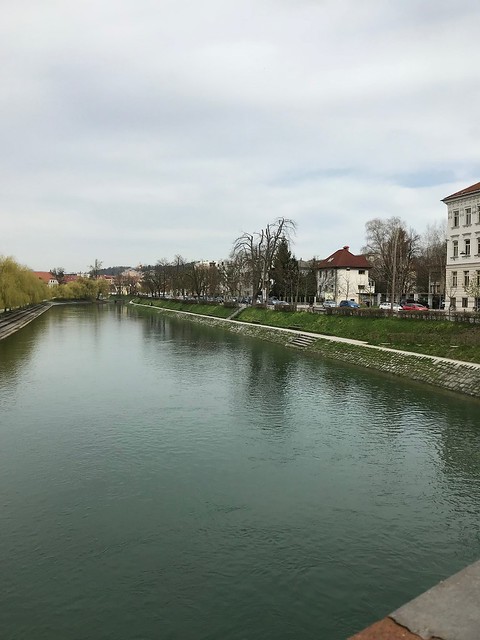 Cool fact, the Old town is on the Baltic Peninsular and the New town is on Mainland Europe. The river is the border between the two!

Just opposite the three bridges on the Old town side was the city’s tourist information centre which was full of useful information (no shit Sherlock, I know, I meant it was a really good Tourist information…) and where we found out about the Ljubljana Card. For €39 each, we were able to get a card that lasted for 72 hours and it allowed entry into all the major attractions in Ljubljana including the castle, the various museums and art galleries, a brewery tour, a boat ride, a walking tour and unlimited use of the city’s busses. Not bad at all for about £35 and we certainly used our money’s worth and more. I would 100% recommend for anyone who’s visiting; you can also get a 24 and 48 hour version.

We then wandered around the markets, spent way more than we intended on some Italian meats and cheese (damn our lack of either Italian or Slovene language skills), and explored some of the streets in the old town before going back to three bridges to the restaurant at the fish market we’d spotted earlier. 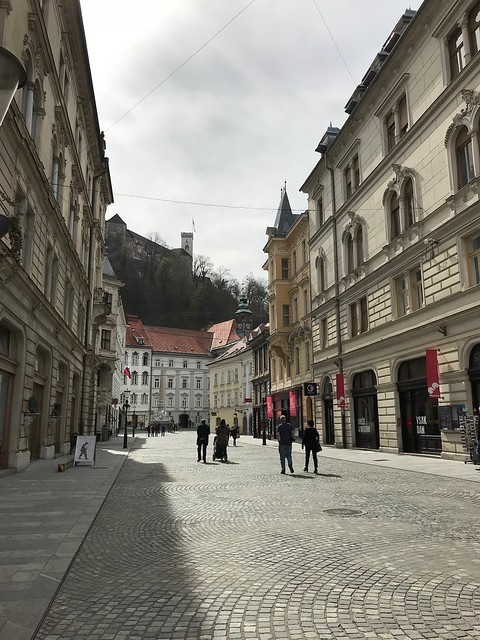 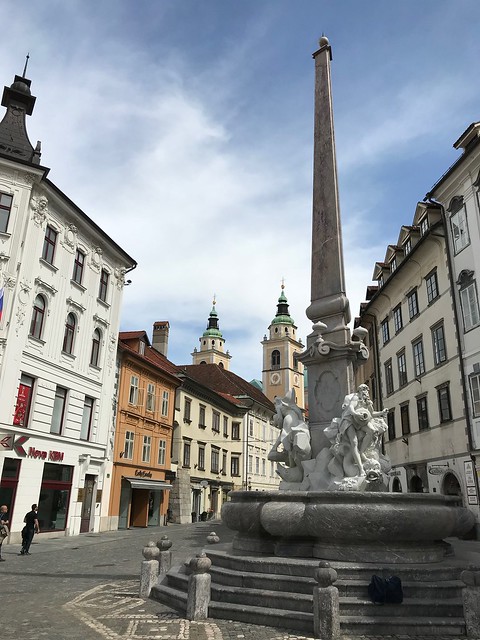 The menu was simple but the range of fish was extensive and we all enjoyed a lovely meal at a very reasonable price, trying some of the local beer in the process. The majority of places in Ljubljana seem to have an English translation of their menu as Slovene isn’t widely spoken outside of Slovenia and isn’t the easiest of languages to learn or pronounce, we did try but often got it wrong. Our lack of Slovene and an odd menu translation did lead to the first tourist fail of the holiday. We all got a bit curious as to what the ‘crab chips’ we’d ordered were, thinking something along the lines of fried sticks of crab meat. No, turns out ‘crab chips’ is just prawn crackers which is pretty obvious when you think about it and we probably wouldn’t have bothered ordering them if we’d known. First Brits Abroad fail of the holiday. 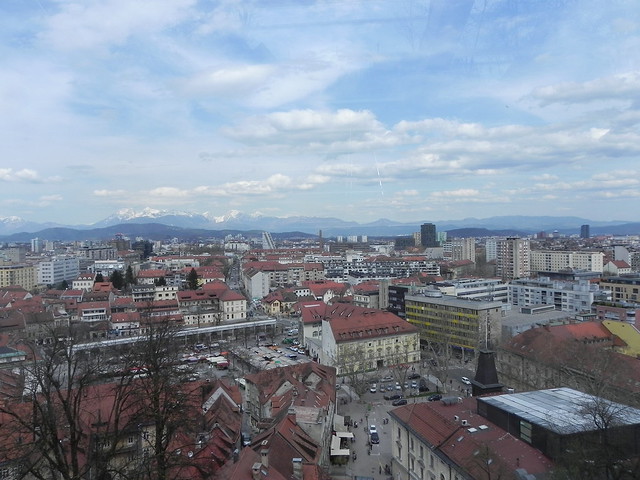 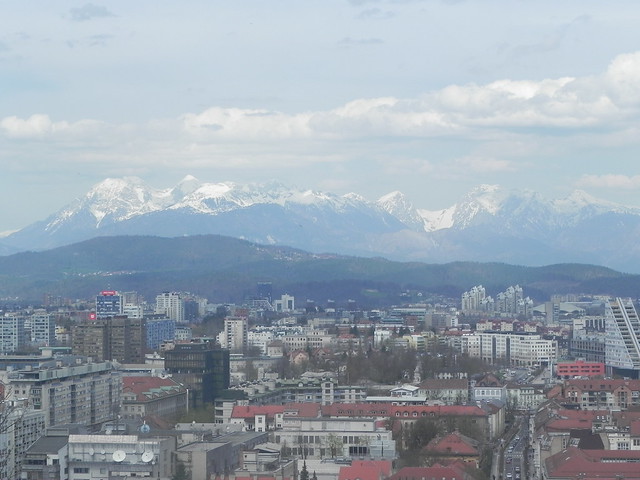 The castle itself is mainly mediaeval but has been altered right up to the 20th Century. Some bits are now converted into uses such as a conference room and a museum of puppetry (family decision was a no thank you on that one) whilst other bits are kept as a more of the original castle including the chapel and the main watchtower. We enjoyed exploring the castle via an audio guide and sampled our first cake stop of the holiday in the castle’s café. 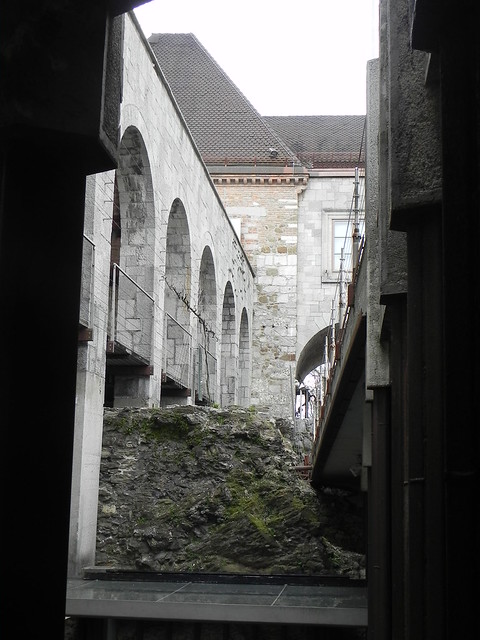 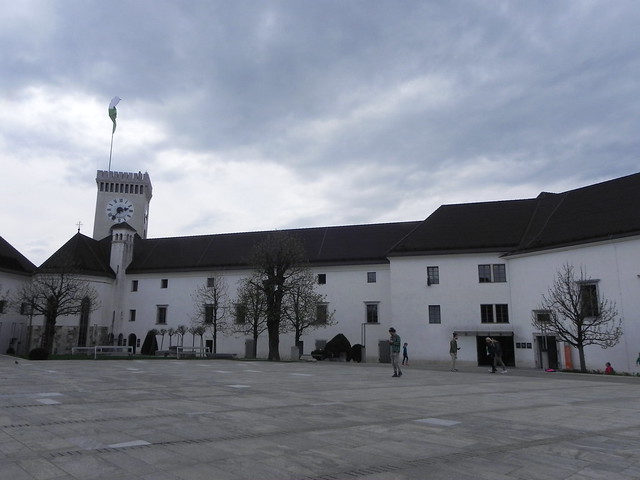 The watchtower was brilliant, it’s a proper trek up a lot of spiral stairs but the view from the top is incredible. On a clear day you can see a third of Slovenia from the top and the views beyond the city were wonderful. It made you realise just how small this tiny capital city is and gave wonderful views beyond the city across the Ljubljana Marsh plain and to the Triglav national park and the Julian Alps. It was also easy to see for yourself just how green Slovenia is. It’s still got something like 60% woodland/forestry coverage across the country and Ljubljana itself is the green capital of Europe (or something like that, they really like to recycle and they make it really easy for everyone to do their bit; the UK could learn a lot from Slovenia about this). 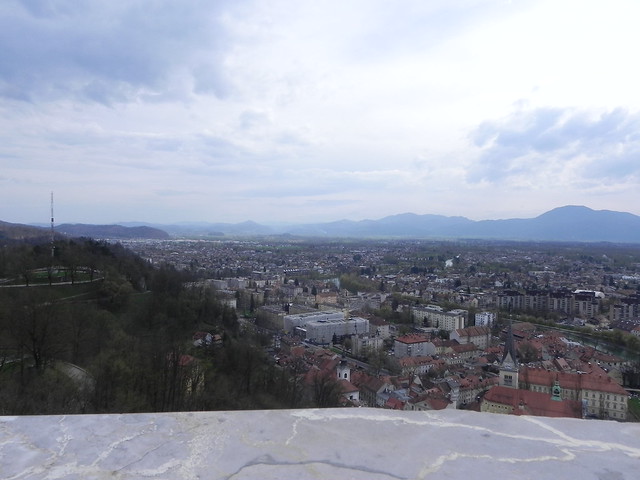 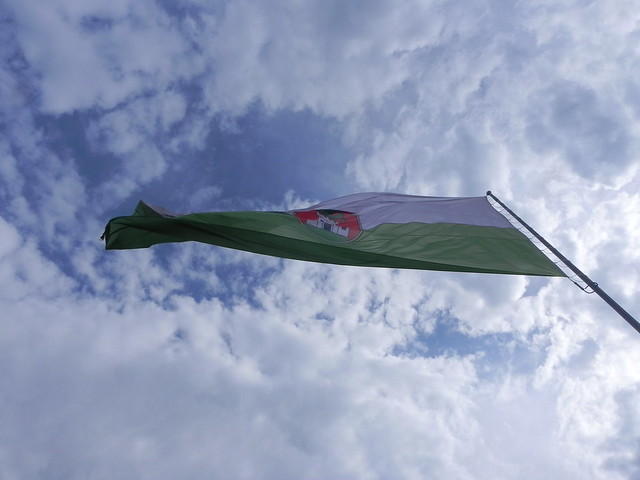 In the watchtower there is also a 15 minute video taking you through the history of Slovenia, in it’s many guises before it became Slovenia in 1991 (yes, the country is only 26, nearly 27, years old). The video is ‘narrated’ by a dragon and you get to hear the myth regarding the dragon which led to Ljubljana becoming the City of Dragons. The city’s links with the dragon (the very same one killed by St. George, supposedly) are prominent everywhere and one of the bridges even has dragons as part of the decoration, It’s known as Dragon Bridge (original). Legend has it that when a virgin walks over the bridge, the dragons wag their tails which I’m not going to lie is rather creepy and I’m not sure why the Slovenians take quite such delight in telling this tale… Anyway…

Ljubljana Castle has not milked this link to dragons any way with a ‘selfie wall’ making you into a dragon. Nope. Not at all. I didn’t take great delight in this either, nope. (By the way, Ljubljana Castle, the ‘selfie wall is false advertising, no one on this earth has long enough arms to get in the full dragon wings when taking a selfie, I’m not sure a selfie stick would even do it, even if I didn’t think selfie sticks should be immediately snapped into 10,000 tiny pieces…)

Also, please can we take a moment to appreciate my Mother being the campest, least scary dragon I have ever seen. I tried to call her Gok (as in Gok Wan), ended up calling her Gwok and she later bought a cast iron dragon ornament who is now named Gwok the dragon. True story. 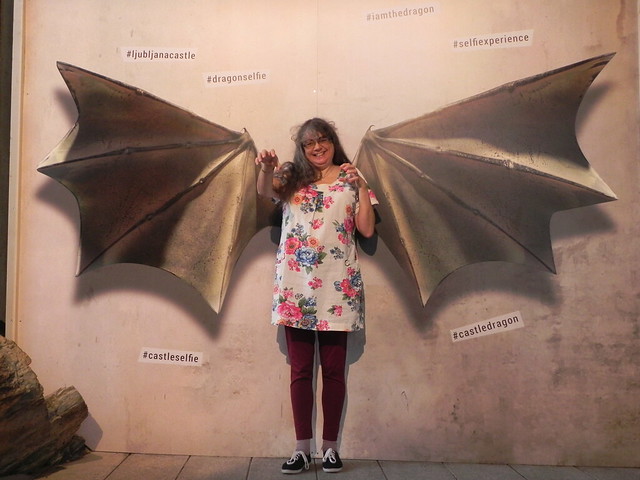 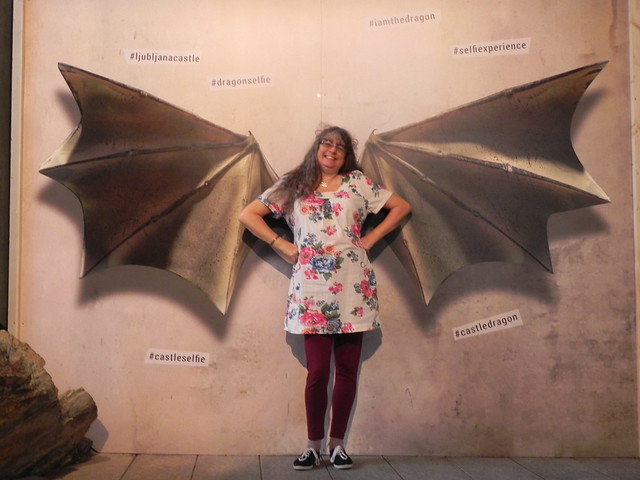 All in all, we had a wonderful first day and headed back tired but happy to our Air BnB to eat a lazy dinner of which the aforementioned expensive meats and cheese featured. It was really very tasty but I’m still not sure it was €60 euros tasty…

A couple of things I noticed straight away about being in Ljubljana was just how clean the city was and how safe I felt there. I am sure there are pickpockets operating there and maybe more so in high season but overall, even when walking through the city at night as we did later in the holiday, everywhere was tidy and everywhere felt very calm and safe. I believe crime rates, especially violent crime rates are pretty low in Slovenia and everyone seemed friendly and happy to be pleasant but keep themselves to themselves. There were certainly many people out enjoying the evening along the riverbank but there wasn’t a group of lairy men or drunk ladettes in sight. It was a welcome change from a night out in London!

So that’s day 1 over and the first castle ticked off the list. If you haven’t already seen, I’m trying to visit 101 places in 1001 days and I can now tick another two places, Ljubljana and Ljubljana castle off the list! You can read the full list and see how I’m progressing here. 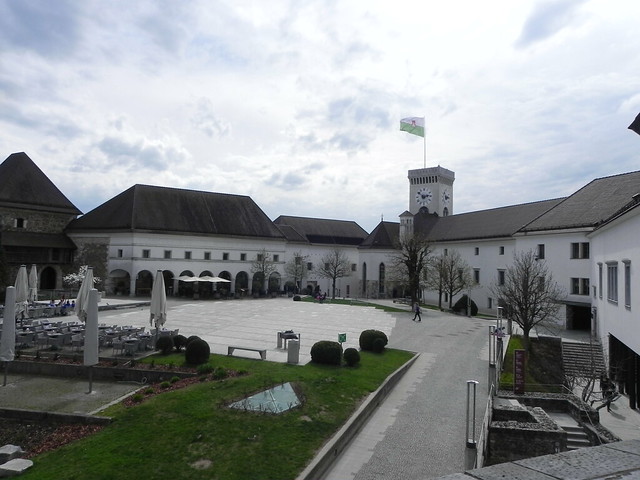 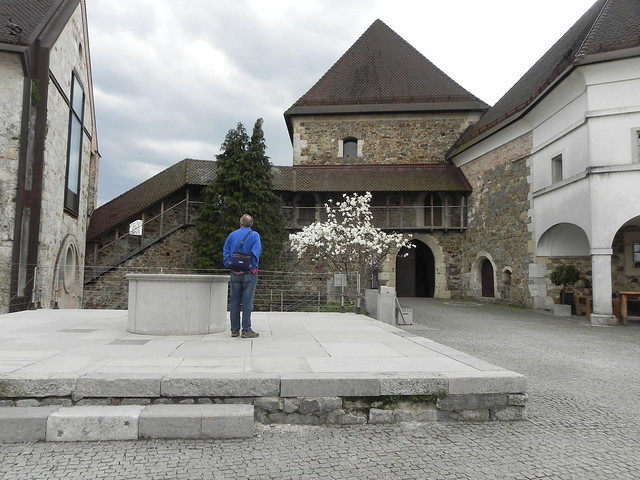